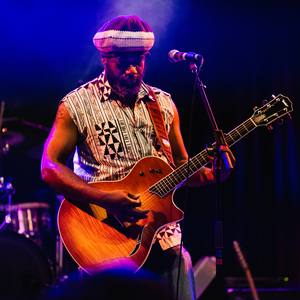 Born in Accra, Ghana, Selasee grew up exposed to the colorful and energetic sounds of Highlife Music. With this exposure Selasee created his own style—a unique blend of Reggae, West African Highlife and American Pop music. Threading together English and West African lyrics for a bright and captivating sound.

Growing up in Accra, he realized his passion for music and gained a good understanding on music’s effect on people. Performing at school, church and being around his elders, Selasee developed and cultivated his musical talents. In 1995, he formed the African Pop group Makuma thus releasing a self titled album “Makuma.” In 1996, Selasee formed a gospel group called Heart To Heart who in 1997 recorded a debut album “Love For All” followed by “Heart To Heart.”

In 2003, Selasee immigrated to the US where he continued to aspire on his solo career.  During this time, Selasee signed on with Running Dreams Records under management with Sean Cassidy.  In 2005, Selasee recorded his debut album “Run” on Running Dreams Records. That same year the title track “Run” won first place in the World Music genre of the International Song Writers Competition. The Tracks “Run” and “Makuma” were also featured in the 2006 FIFA Soccer and 2007 Cricket video games by EA Sports.

In 2006, Selasee performed at MIDEM 06’ in Nice, France and MUSEXPO 06’ in Los Angeles, California. In 2009 he was honored by The Independent Music Awards winning the "Best World Fusion Song" award.
In 2010, Selasee recorded and released his latest album named “African Gate”  on Black Eye Watching Label. In  2013, Selasee  embarked on a new album being produced by the legendary Aston "Family Man" Barrett of Bob Marley & The Wailers—Bob Marley's Music Director. This album will also include special appearances by the Legendary Frankie Paul, Anthony B as well a number of up and coming reggae artists.  The album is due to be released in the later part of  2014.

On the touring circuit, Selasee has shared the stage with reggae legends Steel Pulse, The Wailers, Third World, The Mighty Diamonds, Don Carlos, Barrington Levy, King Yellowman, The Melodians and Anthony B. ....most recently in 2014,he has shared stages with Steel Pulse,Taurus Riley Beenie Man and Julian Marley among others....
In his own words—“Humility is power!”

The Highlife Soul of Reggae: Selasee & Fafa Family Dig at the Roots, Ghanaian Style, on Time for Peace

“I heard a lot of highlife growing up,” recalls Selasee, who was born in Accra,...

“I heard a lot of highlife growing up,” recalls Selasee, who was born in Accra, Ghana’s capital. “But I listened to a lot of big band music, too. Jazz, pop, anything that felt good. Plenty of Bob Marley, too, and African reggae stars like Lucky Dube and Alpha Blondy. Reggae was huge.”

So it’s perfectly natural that the roots reggae vibe is strong on Time for Peace. The vibe only grew stronger thanks to producer Aston ‘Family Man’ Barrett, the longtime bass player and musical director for the legendary Wailers. “Family Man was great,” Selasee says. “He came up with a great horn line for Time For Peace. He brought so much drive to the title track. “

Together, Barrett and Selasee & Fafa Family have created one of the catchiest reggae album title track in years, connecting the musical dots that join the Caribbean, West Africa and the US. “Glory Days” brims with harmonies straight out of soul and gospel. “Baby Sister,” moves deep into a reggae groove. And “Mama Africa” and “Which One” look back to the music of Selasee’s homeland.

Every song resonates with human experiences; each one has very conscious lyrics. “I wanted something that had real feelings,” Selasee explains. “That’s why it’s taken four years since my last album. I didn’t want to record just anything. I needed something with real meaning. Every song represents a different experience. ‘Which One’ is about relationships and choices, for example. You date people, but eventually you have to make up your mind about who you really want to be with, and all the difficulties that go with it. It’s something everyone goes through.”

The title track is a collaboration between Selasee and producer Barrett. “Family Man came up with the bassline and the tune, and I wrote the words,” Selasee remembers. “I was really lucky – we had reggae singer Anthony B in the studio. He started humming a few words, and that triggered the chorus. He ended up singing the third verse.”

And with the conflicts in the Middle East, East Africa, and Eastern Europe, the sentiment behind the song could hardly be more apt. “You hear about all the tribulations going on in the world,” Selasee says sadly, “and you have to think that we owe it to ourselves to have some peace, to give ourselves some time. The chorus, it’s like a mantra to live by.”

It’s all powered along by Selasee’s rich, soulful voice that was formed – like so many other great singers – performing gospel music in church.

“I started out on the gospel scene,” Selasee recounts. “I put together a group called Heart to Heart. We played all over Ghana, as well as Togo, Benin, and Nigeria. But I also had another band that played secular music, Afro-poppish music.” The band, Heart to Heart, was invited to the US, performing in Minneapolis, where they cut an album before returning to Ghana, where Selasee was finishing his degree in music.

“They invited me back to America the next year,” he remembers. “I did a solo acoustic performance and decided to stay and build my music up here.”

His solo debut, Run, appeared in 2005. The title cut took first place in the World Music section of the International Song Writers’ Competition, and, along with “Makuma,” another song from the disc, was featured in video games. 2009 brought African Gate, and now, with his band FaFa Family, Selasee is back with Time for Peace.

“My calling in life has always been as a musician,” Selasee says. “Even growing up, I saw how music could have a positive or a negative impact. I chose to focus on the positive. I’ve got a wonderful band that’s been together since 2001. I live in Boulder, Colorado, in a beautiful place surrounded by mountains. I have my young daughter. How could I not be happy?”

Selasee has found his  Time for Peace with a  celebration of  the physical release of the album on February 2nd 2015.